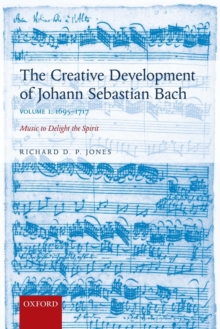 The Creative Development of Johann Sebastian Bach, Volume I: 1695-1717 : Music to Delight the Spirit Paperback / softback

This book gives an account of the individual works of one of the greatest composers. The first volume of a two-volume study of the music of J.

S. Bach covers the earlier part of his composing career, 1695-1717. By studying the music chronologically a coherent picture of the composer's creative development emerges, drawing together all the strands of the individual repertoires (e.g. the cantatas, the organ music, the keyboard music). The volume is divided into twoparts, covering the early works and the mature Weimar compositions respectively.

Within each category, the discussion is prefaced by a list of theworks to be considered, together with details of their original titles, catalogue numbers, and earliest sources.

The study is thus usable as a handbook on Bach's works as well as a connected study of his creative development. As indicated by the subtitle Music to Delight the Spirit,, borrowed from Bach's own title-pages, Richard Jones draws attention to another important aspect of the book: not only is it a study of style and technique but a work of criticism, an analytical evaluation of Bach's music and an appreciation of its extraordinary qualities.

It also takes account of the remarkable advances in Bach scholarship that have been made over the last 50 years, including the many studies that have appearedrelating to various aspects of Bach's early music, such as the varied influences to which he was subjected and the problematic issues of dating and authenticity that arise. In doing so, it attempts to build up a coherent picture of his development as a creative artist, helping us to understand whatdistinguishes Bach's mature music from his early works and from the music of his predecessors and contemporaries.

Hence we learn why it is that his later works are instantly recognizable as 'Bachian'.