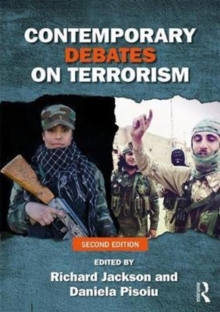 Contemporary Debates on Terrorism is an innovative textbook, addressing a number of key issues in terrorism studies from both traditional and 'critical' perspectives.

This second edition has been revised and updated to cover contemporary issues such as the rise of ISIL and cyberterrorism. In recent years, the terrorism studies field has grown in quantity and quality, with a growing number of scholars rooted in various professional disciplines beginning to debate the complex dynamics underlying this category of violence.

Within the broader field, there are a number of identifiable controversies and questions which divide scholarly opinion and generate opposing arguments.

These relate to theoretical issues, such as the definition of terrorism and state terrorism, substantive issues like the threat posed by al Qaeda/ISIL and the utility of different responses to terrorism, different pathways leading people to engage in terrorist tactics and ethical issues such as the use of drones.

This new edition brings together in one place many of the field's leading scholars to debate the key issues relating to a set of 16 important controversies and questions.

The format of the volume involves a leading scholar taking a particular position on the controversy, followed by an opposing or alternative viewpoint written by another scholar.

In addition to the pedagogic value of allowing students to read opposing arguments in one place, the volume will also be important for providing an overview of the state of the field and its key lines of debate. This book will be essential reading for students of terrorism studies and political violence, critical terrorism studies, security studies and IR in general.