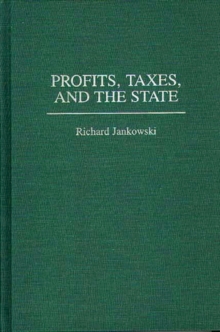 Profits, Taxes, and the State Hardback

In terms of monetary policy, the Volcker-Greenspan chairmanships of the Federal Reserve initiated fundamental changes in monetary policies that lowered inflation.

Jankowski examines both tax and monetary policies to determine their effects on profits.

However, Jankowski argues that the tax policies adopted did not produce the observed constancy in the post-tax profit rate.

He further argues that the elimination of the corporate income tax would have the effect of enhancing redistributive policies. Jankowski's analysis of tax and monetary policies leads to new theories of the state and classes, and he argues that the growth of the state has restructured classes.

The state, and not the workplace, has become the locus of income for the majority of individuals in modern capitalist societies.

This change requires a fundamental rethinking of the nature of classes and class politics.

A controversial analysis that will be vital reading for economists, political scientists, and other scholars and policymakers dealing with tax and monetary issues.