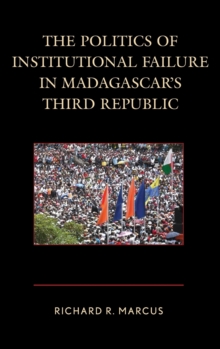 The Politics of Institutional Failure in Madagascar's Third Republic Hardback

Madagascar's constitution of August 19, 1992 brought hope to a population exhausted by economic failures associated with a failed experiment in scientific socialism and years of mismanagement.

The repetition of transparent elections and the promulgation of "good governance" in the years that followed appeared to serve as an indicator of institutional strengthening and, by extension, progress.

Unfortunately, a broader institutional analysis points toward a series of shocks to the political system by way of legal, but highly detrimental, juridical and constitutional shifts to the system.

These shocks were meant to serve particularized political networks with long clientalistic roots and were made possible by the narrow vision of institutionalism that did not take careful stock of those networks or the leaders at the top of them.

Little effort was made to look beyond a legislature brought in by careful elections but producing legislation serving individuals, the ways in which inchoate political parties distort institutional outcomes and the potential for institutionalization, the weakness of civil society to offer opportunities for popular engagement, or the use of donor-funded decentralization programs to build ministries that served as powerful and rapid proxies for leadership centralization.

By the time the celebrated president, Marc Ravalomanana, was overthrown in March 2009 it became clear that there were few opportunities to seed political opposition and such limited space between individual leaders and primary institutions of public management that critical state functions immediately began to unravel.

In this book the author considers the institutions of the Third Republic, how they formed, and why they looked like models for democratic change before turning to consider how the institutions themselves have been manipulated in plain sight by leaders looking to champion their own networks.

He concludes that the rise of the Fourth Republic in 2010 did little to address these underlying concerns and argues that a new agenda is in order to consider not just the way in which institutions form, but the way in which networks of power, and leaders at the top of those networks, grow and change malleable institutions in young democracies with few avenues of accountability.