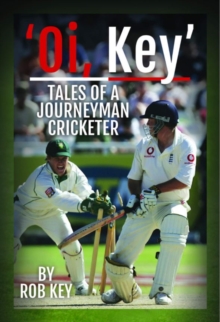 EX-England batsman Rob Key is one of the wittiest pundits on TV.

Whether it's a drizzly day-nighter in Derby or a World Cup Final at Lord's, Key's wizardry with the mic more than matches that which he had with the bat. In his new book, Key reflects on the past and present of an ever-unforgiving game, in so doing shining light into the darkest recesses of the dressing-room.

What he finds there is as amusing as it is shocking, as farcical as it is fascinating. Known as one of the sharpest cricket brains around, Key casts a knowledgeable and sometimes acerbic eye over such areas as fitness, captaincy, and sledging, while delivering a close-up view of some of the biggest names in the game. More than anything, Key reveals just what it is to be a professional cricketer, the camaraderie, the comedy, and, of course, the calamity.