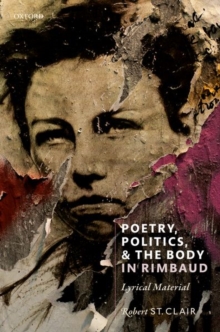 Poetry, Politics, and the Body in Rimbaud : Lyrical Material Hardback

Bodies abound in Rimbaud's poetry in a way that is nearly unprecedented in the nineteenth-century poetic canon: lazy, creative, rule-breaking bodies, queer bodies, marginalized and impoverished bodies, revolting and revolutionary, historical bodies. The question that Poetry, Politics, and the Body seeks to answer is: What does this corporeal density mean for reading Rimbaud?

What kind of sense are we to make of this omnipresence of the body in the Rimbaldian corpus, from first to last-from the earliest poems in verse celebrating the sheer, simple delight of running away from wherever one is and stretching one's legs out under a table, to the ultimate flight away from poetry itself?

In response, this book argues that the bodyappears-often literally-as a kind of gap, breach, or aperture through which Rimbaud's poems enter into contact with history and a larger body of other texts.

Simply put, the body is privileged 'lyrical material' for Rimbaud: a figure for human beings in their exposed, finite creatureliness and in theirunpredictable agency and interconnectedness.

Its presence in the early work allows us not only to contemplate what a strange, sensuous thing it is to be embodied, to be both singular and part of a collective, it also allows the poet to diagnose, and the reader to perceive, a set of seemingly intractable, 'real' socio-economic, political, and symbolic problems.

Rimbaud's bodies are, in other words, utopian bodies: sites where the historical and the lyrical, the ideal and the material, do not somuch cancel each other out as become caught up in one another.