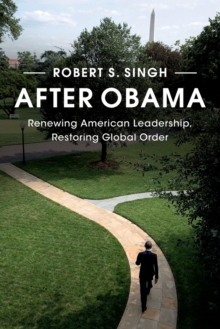 Barack Obama's foreign policy has failed but the American strategic mind has not yet closed.

In After Obama, Robert Singh examines how and why US influence has weakened and contributed to the erosion of the world America made, endangering international order and liberal values.

A well-intentioned but naive strategy of engagement has encouraged US adversaries such as Russia, China and Iran to assert themselves while allowing Western alliances to fray.

But, challenging claims of an inevitable American decline, Singh argues that US leadership is a matter of will as much as wallet.

Despite partisan polarization at home and the rise of the rest abroad, Washington can renew American leadership and, through a New American Internationalism, pave a path to the restoration of global order.

Timely and provocative, the book offers a powerful critique of the Obama Doctrine and a call for strategic resolution in place of 'leading from behind'.