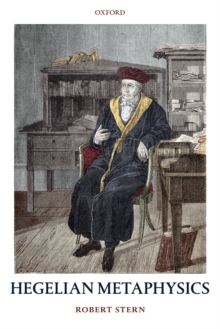 by Robert (University of Sheffield) Stern

The great German idealist philosopher G. W. F. Hegel has exerted an immense influence on the development of philosophy from the early 19th century to the present.

But the metaphysical aspects of his thought are still under-appreciated. In a series of essays Robert Stern traces the development of a distinctively Hegelian approach to metaphysics and certain central metaphysical issues.

The book begins with an introduction that considers this theme as a whole, followedby a section of essays on Hegel himself.

Stern then focuses on the way in which certain key metaphysical ideas in Hegel's system, such as his doctrine of the 'concrete universal' and his conception of truth, relate to the thinking of the British Idealists on the one hand, and the AmericanPragmatists on the other.

The volume concludes by examining a critique of Hegel's metaphysical position from the perspective of the 'continental' tradition, and in particular Gilles Deleuze.