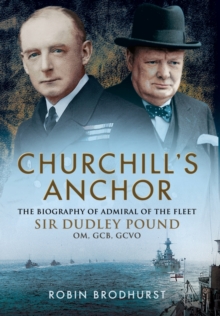 Dudley Pound served for longer on the Chiefs of Staff Committee in wartime than any other serviceman in either of the two World Wars. He was the professional head of the Royal Navy from July 1939 until his resignation, shortly before his death, in August 1943. He had to cope with the problems of Hitler by day and Churchill by night, of trying to make the old ships of the Royal Navy face the challenge of the modern navies of Germany, Italy and Japan. Pound had to run the operational HQ of the Admiralty while also chairing the Chiefs of Staff Committee. As such he was involved in some of the most controversial decisions in the Naval War in Norway 1940, the sinking of the French Fleet, the despatch of The Prince of Wales and Repulse to Singapore, the scattering of convoy PQ17 while, all the while, courageously fighting failing health and enduring huge strain.

However by the time of his death the Battle of the Atlantic had been won and the Mediterranean cleared. Churchill's Anchor aims to put Dudley Pound's achievements into context.He held a succession of key commands from a battleship at Jutland to the Mediterranean fleet for four years, alternating with key appointments at the Admiralty. He was at the centre of naval affairs from 1914 until his death in 1943.