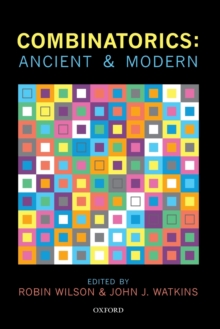 Yet, the history of combinatorics seems to have been largely overlooked.

Individual chapters have been contributed by sixteen experts.

The book opens with an introduction by Donald E. Knuth to two thousand years of combinatorics. This is followed by seven chapters on early combinatorics, leading from Indian and Chinese writings onpermutations to late-Renaissance publications on the arithmetical triangle.

The next seven chapters trace the subsequent story, from Euler's contributions to such wide-ranging topics as partitions, polyhedra, and latin squares to the 20th century advances in combinatorial set theory, enumeration, and graph theory.

Cameron. This book is not expected to be read from cover to cover, although itcan be.

Rather, it aims to serve as a valuable resource to a variety of audiences.

Combinatorialists with little or no knowledge about the development of their subject will find the historical treatment stimulating.

A historian of mathematics will view its assorted surveys as an encouragement forfurther research in combinatorics.

The more general reader will discover an introduction to a fascinating and too little known subject that continues to stimulate and inspire the work of scholars today.