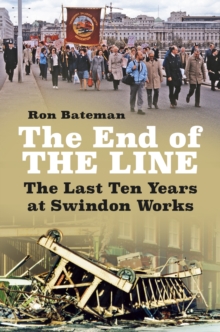 The End of the Line : The Last Ten Years at Swindon Works Paperback / softback

In 1977, the iconic Swindon Works was building locomotives. By 1986, it was shut down. In The End of the Line, Ron Bateman recounts the fight to save Swindon Works, its 3,500 jobs and the livelihood of the entire community it represented.

Initially joining through the Works Training School in 1977, Ron witnessed this tragic struggle and the crushing blow dealt to the industry that had defined Swindon for generations. Combining personal recollections with information and interviews from many other insiders and railmen, this book provides the only comprehensive chronicle on the final decade of 147 years of railway engineering and a fateful milestone in the history of Swindon.