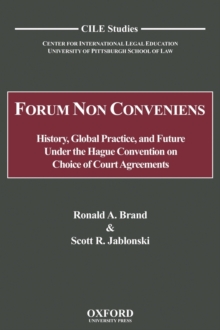 With increased international trade transactions and a corresponding increase in disputes arising from those transactions, the application of the doctrine of Forum Non Conveniens - the discetionary power of a court to decline jurisdiction based on the convenience of the parties and the interests of justice - is of great relevance to threshold issues of which country's court should preside over a controversy involing nationals of difference countries.

Forum NonConveniens History, Global Practice, and Future under the hague Convention of Court Agreements provides an in-depth analysis of the common law doctrine of Forum Non Conveniens as it has evolved in the four major common law countries (UK, US, Canada, and Australia).

The book also analyses the similaritiesand differences of the doctrine among those four countries.

It compares Forum Non Conveniens to the more rigid analogous doctrine of Lis Alibi Pendens found in civil law countries, which requires automatic deference to the court where a dispute is first filed and explains current initiatives for coordinating jurisdictional issues between the common law and civil law systems, the most important of which is the 2005 Hague Convention on Choice of Court Agreements.

The authors explain how the HagueConvention provides a rational approach to the confluence of common law and civil law doctrines and how its application to international transactions is likely to temper judicial application of the doctrine of forum non conveniens and provide greater predictability with respect to enforcement ofprivate party choice of court agreements.