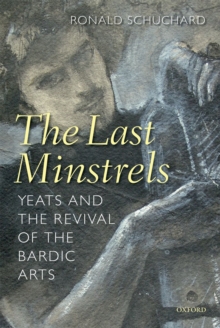 The Last Minstrels : Yeats and the Revival of the Bardic Arts Paperback / softback

Recovering a lost literary movement that was the most consuming preoccupation of W.

B. Yeats's literary life and the most integral to his poetry and drama, Ronald Schuchard's The Last Minstrels provides an historical, biographical, and critical reconstruction of the poet's lifelong attempt to restore an oral tradition by reviving the bardic arts of chanting and musical speech.

From the beginning of his career Yeats was determined to return the 'living voice'of the poet from exile to the centre of culture - on its platforms, stages, and streets - thereby establishing a spiritual democracy in the arts for the non-reading as well as the reading public.

Schuchard's study enhances our understanding of Yeats's cultural nationalism, his aims for the Abbey Theatre, and his dynamic place in a complex of interrelated arts in London and Dublin.

With a wealth of new archival materials, the narrative intervenes in literary history to show the attempts of Yeats and Florence Farr to take the 'new art' of chanting to Great Britain, America, and Europe, and it reveals for the first time the influence of their auditory poetics on the visual paradigm of theImagists.

The penultimate chapter examines the adjustments Yeats made for his movement during the war, including chanting and other adaptations from Noh drama for his dance plays and choruses, until the practice of his 'unfashionable art' became dormant in the 1920s before the restless rise ofrealism.

The final chapter resurrects his heroic effort in the 1930s to reunite poetry and music and reconstitute his dream of a spiritual democracy through the medium of public broadcasting.