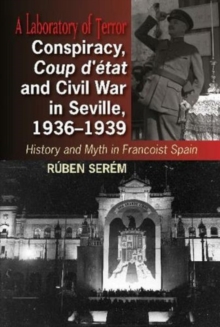 Conspiracy, Coup detat and Civil War in Seville, 19361939 dissects the conspiracy against the democratic Second Spanish Republic in the context of the uprising and civil war in Seville, the capital of Spains largest region, Andalusia, and the most populous urban centre seized by the military rebels during the coup detat of July 1936.

As the major industrial and economic centre in insurgent Spain, Seville remains central to understanding the rebels repressive project, for this Andalusian province witnessed the highest number of extra-judicial assassinations throughout the war.

This is the first book in any language to bring together the subject of the civil war in Seville, the career of one of the most influential leaders of the rebel faction, General Queipo de Llano, and Francoisms most resilient myth.

It dismantles, one by one, a series of carefully constructed narratives employed as rhetorical weapons to justify both the rebellion and the murderous rule of Queipo de Llano.

The size and importance of the city meant that it became a critical battleground in the struggle for political legitimacy and it remains so for Spains on-going memory wars, a series of public and academic disputes over the historical memory of the Franco regime.

Ruben Serem examines the socio-economic context of Queipos great purge, the painful transition from democracy to autocracy and the political nature of the generals rule in Andalusia.

In doing so, this work demonstrates how several features of Queipos system of government were enthusiastically embraced by the nascent Francoist state, hence Sevilles unenviable status as a Laboratory of Terror.