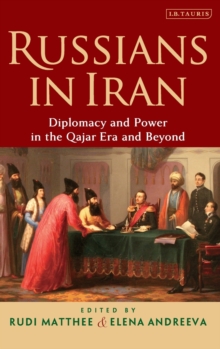 Russians in Iran : Diplomacy and Power in the Qajar Era and Beyond Hardback

Russians in Iran seeks to challenge the traditional narrative regarding Russian involvement Iran and to show that whilst Russia's historical involvement in Iran is longstanding it is nonetheless much misunderstood.

Russia's influence in Iran between 1800 and the middle of the twentieth century is not simply a story of inexorable intrusion and domination: rather, it is a complex and interactive process of mostly indirect control and constructive engagement. Drawing on fresh archival material, the contributors provide a window into the power and influence wielded in Iran not just by the Russian government through it traditional representatives but by Russian nationals operating in Iran in a variety of capacities, including individuals, bankers, and entrepreneurs. Russians in Iran reveals the multifaceted role that Russians have played in Iranian history and provides an original and important contribution to the history and international relations of Iran, Russia and the Middle East.