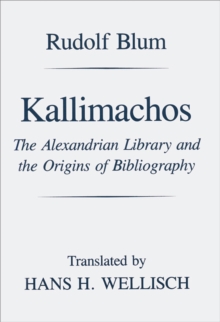 Kallimachos : The Alexandrian Library and the Origins of Bibliography Paperback / softback

The famous library of Alexandria, founded around 295 BCE by Ptolemaios I, housed the greatest collection of texts in the ancient world and was a fertile site of Hellenistic scholarship.

Rudolf Blum's landmark study, originally published in German in 1977, argues that Kallimachos of Kyrene was not only the second director of the Alexandrian library but also the inventor of two essential scholarly tools still in use to this day: the library catalog and the "biobibliographical" reference work.

Kallimachos expanded the library's inventory lists into volumes called the Pinakes, which extensively described and categorized each work and became in effect a Greek national bibliography and the source and paradigm for most later bibliographic lists of Greek literature.

Though the Pinakes have not survived, Blum attempts a detailed reconstruction of Kallimachos's inventories and catalogs based on a careful analysis of surviving sources, which are presented here in full translation.