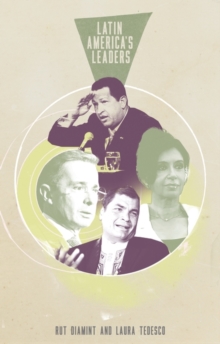 Cult-of-personality or true democracy? The rise of populism worldwide, combined with the overwhelming success of leaders in Latin America, has positioned the region at the forefront of political debate.

Conventional wisdom presents this trend as a handful of charismatic individuals leading an ideological challenge to liberal democracy.

But can it really be that simple?Based on exclusive interviews with over three hundred politicians - former presidents, vice presidents, current party officials and hundreds more - Latin America's Leaders exposes what the Pink Tide really thinks of its presidents.

Arguing that the political styles of leaders such as Hugo Chavez, Rafael Correa, Alvaro Uribe and Cristina Fernandez de Kirchner are far better explained in the context of their respective countries' party systems, the authors examine political stability through the paradoxical relationship between democracy and the concentration of power in charismatic individuals. This is the definitive guide to the world's most left-wing continent.