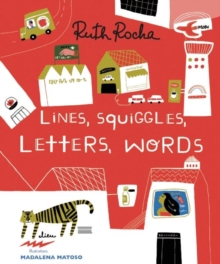 A child who has not yet learned how to read looks out at the world and sees language as such a child would: as lines and squiggles that don't exactly make pictures but don't seem to make anything else either.

Then, when the child starts to go to school and begins to learn his letters, his way of seeing begins to change. Ruth Rocha is Brazil's most popular children's book author.

Her first book was published in 1976. She has more than 130 published titles and has been translated into over twenty-five languages. Madalena Matoso studied Communication Design at Lisbon College of Fine Arts and has a graduate degree from the Fine Arts Faculty in Barcelona.

In 1999, she and three friends created Planeta Tangerina.