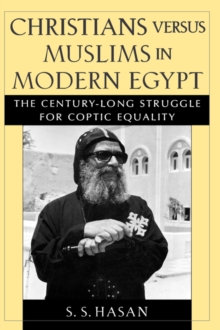 Christians versus Muslims in Modern Egypt : The Century-Long Struggle for Coptic Equality Hardback

The Copts of Egypt are the largest Christian minority in the Middle East.

In recent years they have often been victims of persecution and violence at the hands of the Muslim majority.

This volume is the first full study of Coptic Christians in contemporary Egypt.

Hasan begins by looking at how the Coptic generation of the 1940s and 1950s remembered, recovered, and invented the ancient history of Christianity in Egypt in order to weld the Copts into a unified nation. The book then focuses on the period beginning with the consecration of Pope Shenuda in 1971.

During this revival period the church took over much of the responsibility for the welfare of the Coptic community.

The leaders of the revival, she shows, have nurtured a potent and distinctive religiousculture with a sense of communal pride and identity despite its hostile surrounding environment.