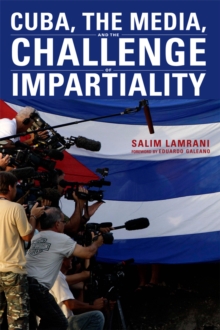 Cuba, the Media, and the Challenge of Impartiality Paperback / softback

In this concise and detailed work, Salim Lamrani addresses questions of media concentration and corporate bias by examining a perennially controversial topic: Cuba.

Lamrani argues that the tiny island nation is forced to contend not only with economic isolation and a U.S. blockade, but with misleading or downright hostile media coverage.

He takes as his case study El Pais, the most widely distributed Spanish daily.

El Pais (a property of Grupo Prisa, the largest Spanish media conglomerate), has editions aimed at Europe, Latin America, and the U.S., making it a global opinion leader.

Lamrani wades through a swamp of reporting and uses the paper as an example of how media conglomerates distort and misrepresent life in Cuba and the activities of its government.

By focusing on eight key areas, including human development, internal opposition, and migration, Lamrani shows how the media systematically shapes our understanding of Cuban reality.

This book, with a preface by Eduardo Galeano, provides an alternative view, combining a scholar's eye for complexity with a journalist's hunger for the facts.