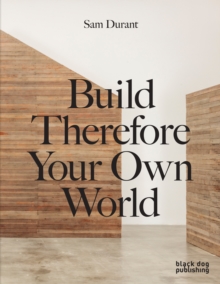 His work has been widely exhibited in the UK, Europe, Asia and the Americas.

It has been included in the Panama, Sydney, Venice, and Whitney Biennials and can be found in many public collections including MOMA, New York, Project Row Houses, Houston and Tate Modern, London.

Based in Los Angeles, Durant teaches at the California Institute of the Arts.

Durant's 'The Meeting House' (2016) was a public art project at The Old Manse, a National Historic Landmark built in 1770 and former home and gathering place for politicians, thinkers, and transcendentalists including Ralph Waldo Emerson and Nathaniel Hawthorne.

The sister exhibition at Blum & Poe, Los Angeles in 2017, 'Build Therefore Your Own World', introduced new works that expanded upon Durant's premise of the interdependence between transcendentalists, abolitionists, and African American writers of pre- and post-revolutionary America in the creation of American culture and identity.Featured in The Meeting House / Build Therefore Your Own World is a full-colour photo documentation of the project in Concord, MA and Los Angeles, CA as well as new essays by Pedro Alonzo, independent curator, and Tim Phillips, pioneer in the field of conflict resolution and reconciliation; and a new collection of poems by Tisa Bryant, Robin Coste Lewis, Danielle Legros Georges, and Kevin Young, who recently became Director of the Schomburg Center for Research in Black Culture in New York.