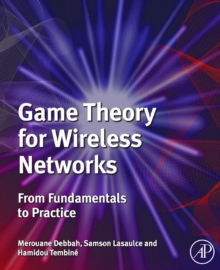 Written by leading experts in the field, Game Theory and Learning for Wireless Networks Covers how theory can be used to solve prevalent problems in wireless networks such as power control, resource allocation or medium access control.

With the emphasis now on promoting 'green' solutions in the wireless field where power consumption is minimized, there is an added focus on developing network solutions that maximizes the use of the spectrum available. With the growth of distributed wireless networks such as Wi-Fi and the Internet; the push to develop ad hoc and cognitive networks has led to a considerable interest in applying game theory to wireless communication systems.

Game Theory and Learning for Wireless Networks is the first comprehensive resource of its kind, and is ideal for wireless communications R&D engineers and graduate students. Samson Lasaulce is a senior CNRS researcher at the Laboratory of Signals and Systems (LSS) at Supelec, Gif-sur-Yvette, France.

He is the holder of the Alcatel-Lucent chair in flexible radio since 2007.