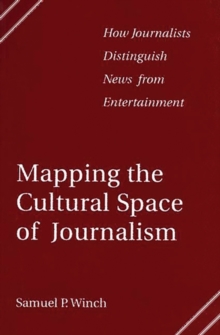 Addressing the controversial issues of the blurring boundaries between news and entertainment and the movement toward sensationalism in broadcast journalism, this study examines these distinctions: how boundaries are constructed and by whom; how they are enforced or broken and why.

Rather than reflecting essential attributes by which news can be distinguished from other kinds of communication, boundary setting is viewed as a social construction, determined and changed by journalists wishing to assert their jurisdiction and authority and the prestige of the profession.

Four instances of boundary-work rhetoric are examined in depth: (1) the development of roles and rules of television journalism during the early years of television; (2) attempts at Congressional and FTC regulation-broadcasting codes defining bona fide news; (3) responses to a 1992 journalistic scandal over a Dateline NBC story on exploding GM pickup trucks, and (4) reporting sex scandals during recent political campaigns, such as the allegations of Gennifer Flowers of her involvement with Bill Clinton.

In these and other cases, journalists developed strategies to minimize harm to the profession.