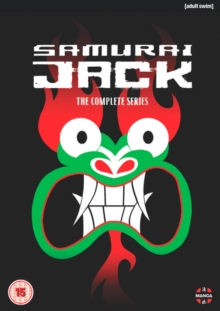 All the episodes from the American children's animation about a samurai prince known as Jack (voice of Phil LaMarr) who is propelled into the future by his rival, a shape-shifting demon named Aku (Mako).

Their rivalry continues in the future as Jack attempts to find a time portal that will return him to his own time and give him the chance to finally rid the world of Aku's evil ways.