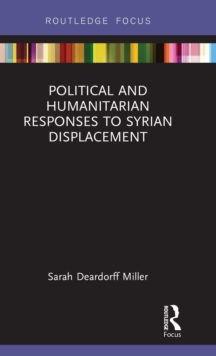 This book examines Syrian displacement since the start of the 2011 conflict.

It considers how neighboring refugee-hosting states - namely Jordan, Turkey and Lebanon - have responded to Syrian refugees, as well as how the international humanitarian community has assisted and protected refugees and internally displaced persons (IDPs).

Responses to displacement should therefore not just be thought of in a humanitarian context, but also as a political, security and economic issue. Drawing on media reports, research briefs, scholarly books and articles, NGO reports and UN research to contextualize and critically analyze the blur of headlines and rhetoric on Syria, the book seeks to shed light on the political and humanitarian responses to displacement.

It seeks to inform policymakers, practitioners and scholars about the current Syrian displacement situation, helping to make sense of the complex web of literature on Syrian refugees and IDPs.