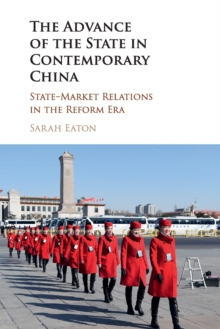 The Advance of the State in Contemporary China : State-Market Relations in the Reform Era Paperback / softback

Since the global financial crisis of 2008-9, central-level, state-owned enterprises (SOEs) in China have extended their reach into the Chinese economy.

Some have interpreted this development as a turning point in Chinese economic development; a decision for state capitalism and a stand against slow but steady marketization.

In The Advance of the State in Contemporary China, Sarah Eaton suggests that the shift is a much slower-moving process and that this particular aspect of state sector reform can be seen to predate the financial crisis.

She argues that the 'advance of the State' has in fact developed incrementally from an eclectic set of ideas regarding the political and economic significance of large and profitable state-controlled enterprise groups.