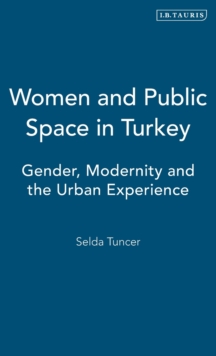 Women and Public Space in Turkey : Gender, Modernity and the Urban Experience Hardback

Turkey's process of `modernization' developed rapidly during the second half of the twentieth century.

New social and legal reforms were institutionalized and political and economic changes located the country as a more liberated, `Western-style' society.

Women and Public Space in Turkey provides a historical understanding of women's experiences of this modernization between 1950 and 1980, a vital period in which their participation in urban public life expanded through higher education and employment.

Selda Tuncer examines the precise conditions that enabled women to leave the home and reveals how they perceived and experienced urban public space and social relations.

Drawing on interviews with two generations of women from Ankara, and using personal family photographs, the book provides invaluable insights into women in a predominantly Muslim society who are living in a highly secular social context.

Tuncer specifically focuses on women's everyday experiences and discusses how the relationship between women and public space was actually controlled and regulated by different notions of `domestication', especially in the micro-politics of daily life.

The book sheds new light on the gendered processes of nation-building, socio-cultural transformations, and the crucial connections between gender, modernity and the urban experience in a non-Western context.