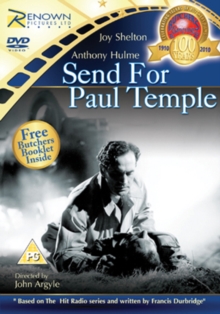 British thriller based on the long-running 1940s radio series.

When a spate of deadly robberies breaks out across the nation, a Scotland yard detective and friend of Paul's comes to visit him - and is found dead a short time later, apparently having committed suicide.

As Temple takes up the investigation, he comes into contact with the woman who will eventually become his wife, the dead man's sister Steve (Joy Shelton).