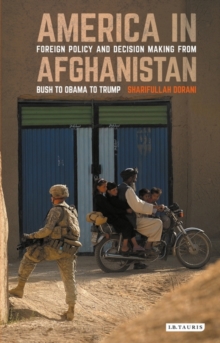 America in Afghanistan : Foreign Policy and Decision Making from Bush to Obama Hardback

Afghanistan has been a theatre of civil and international conflict for much of the 20th Century - stability is essential if there is to be peace in the Middle East.

Yet policymakers in the West often seem to forget the lessons learned from previous administrations, whose interventions have contributed to the instability in the region.

Here, Afshan Dorani focuses on the process of decision-making, looking at which factors influenced American policy-makers in the build-up to the second Afghan War, and how reactions on the ground in Afghanistan have influenced events since then.

America in Afghanistan is a new, full history of US foreign policy toward Afghanistan from President George W.

Bush's administration and the `war on terror', to President Barack Obama's drone strikes.

Dorani is fluent in Pashto and Dari and uses unique and unseen Afghan source-work, published here for the first time, to understand the people in Afghanistan itself.

To that end the author also assesses the work of the advisors who influenced Presidents Kharzai and Ghani.

This will be an essential book for those interested in the future of the region, and those who seek to understand its recent past.