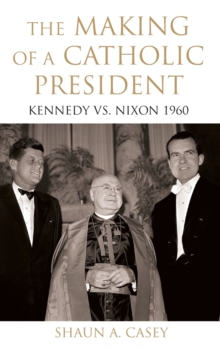 The Making of a Catholic President : Kennedy vs. Nixon 1960 Hardback

by Shaun A. (Visiting Fellow at the Center for American Progress and Associate Professor of Chri Casey

Kennedy, was one of the closest and most contentious in American history.

The country had never elected a Roman Catholic president, and the last time a Catholic had been nominated-New York Governor Al Smith in 1928-he was routed in the general election.

From the outset, Kennedy saw the religion issue as the single most important obstacle on his road to the White House.

He was acutely aware of, and deeplyfrustrated by, the possibility that his personal religious beliefs could keep him out of the White House. In The Making of a Catholic President, Shaun Casey tells the fascinating story of how the Kennedy campaign transformed the "religion question" from a liability into an asset, making him the first (and still only) Catholic president.

Drawing on extensive archival research, including many never-before-seen documents, Casey takes us inside the campaign to show Kennedy's chief advisors-Ted Sorensen, John Kenneth Galbraith, Archibald Cox-grappling with the staunch opposition to thecandidate's Catholicism.

Casey also reveals, for the first time, many of the Nixon campaign's efforts to tap in to anti-Catholic sentiment, with the aid of Billy Graham and the National Association of Evangelicals, among others.

The alliance between conservative Protestants and the Nixon campaign, he shows,laid the groundwork for the rise of the Religious Right.

This book will shed light on one of the most talked-about elections in American history, as well as on the vexed relationship between religion and politics more generally. With clear relevance to our own political situation-where politicians' religious beliefs seem more important and more volatile than ever-The Making of a Catholic President offers rare insights into one of the most extraordinary presidential campaigns in American history.