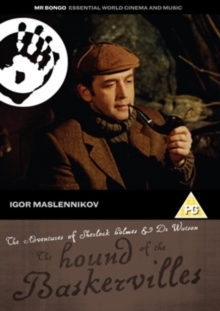 Sherlock Holmes: The Hound of the Baskervilles DVD

Henry Baskerville (Nikita Mikhalkov) learns that his wealthy uncle has died and, as his only heir, makes his way to London to collect his inheritance.

His uncle's death appears suspicious, however, and alludes to an old family curse concerning a demonic dog that dates back to two centuries ago.

Detective Sherlock Holmes (Vasili Livanov) and his friend, Doctor Watson (Vitali Solomin), investigate and attempt to reveal the truth before Henry finds himself in danger.