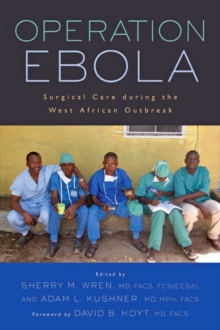 Part of the Operation Health series

One of the horrors of the West African Ebola outbreak was the decimation of the area's already thin ranks of surgeons.

As Ebola spread, health facilities closed, and some doctors-afraid of catching the disease-left the region or stopped performing surgery.

Many of those who stayed contracted Ebola and died. As the pool of doctors available-and willing-to perform surgery dwindled, treatable conditions unrelated to the disease, including appendicitis, unrepaired hernias, stomach ulcers, and obstructed labor, went untreated with devastating results.

Drs. Sherry M. Wren and Adam L. Kushner both worked extensively with surgeons in Ebola-ravaged countries during the 2014 outbreak.

Recognizing that there was no guidance available for how to perform surgery under such dangerous conditions, Wren and Kushner collaborated to create official guidelines for safe surgical procedures in cases of confirmed or suspected Ebola. Operation Ebola documents these procedures and describes in vivid detail the conditions that faced both local surgeons and the international surgeons who came to help. Bringing together a group of medical experts from Sierra Leone and across the globe to tell their stories and offer hard-learned lessons, this book is a riveting first-hand account of performing surgery in under-resourced parts of the world.

Through these health workers' eyes, readers will come to understand what it feels like to wear personal protective equipment (PPE) while operating, what dangers remain when using PPE, how to construct an Ebola maternity ward, and how to give anesthesia to patients during a time of Ebola.

A succinct and gripping exploration of how an outbreak can affect surgical care and the surgeons who provide it, this book will interest medical professionals, students, policy makers, donors, and anyone who cares about Ebola or global health. Contributors: Kathryn P. Barron, Hakon A. Bolkan, Severine Caluwaerts, Joseph Forrester, Andrew M.