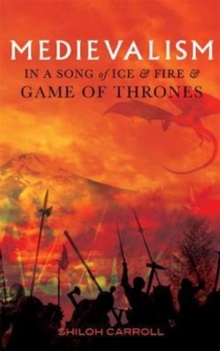 One of the biggest attractions of George R.R. Martin's high fantasy series A Song of Ice and Fire, and by extension its HBO television adaptation, Game of Thrones, is its claim to historical realism.

The author, the directors and producers of the adaptation, and indeed the fans of the books and show, all lay claim to Westeros, its setting, as representative of an authentic medieval world.

But how true are these claims? Is it possible to faithfully represent a time so far removed from our own in time and culture? And what does an authentic medieval fantasy world look like?

This book explores Martin's and HBO's approaches to and beliefs about the Middle Ages and how those beliefs fall into traditional medievalist and fantastic literary patterns.

Examining both books and programme from a range of critical approaches - medievalism theory, gender theory, queer theory, postcolonial theory, and race theory - Dr Carroll analyzes how the drive for historical realism affects the books' and show's treatment of men, women, people of colour, sexuality, and imperialism, as well as how the author and showrunners discuss these effects outside the texts themselves. SHILOH CARROLL teaches in the writing center at Tennessee State University.