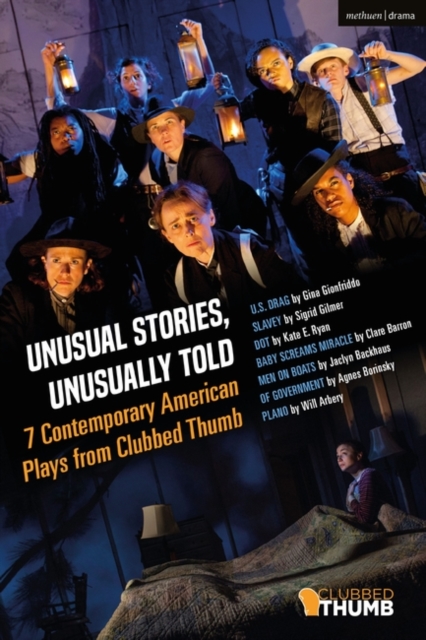 Spanning 2001 to 2019 and accompanied by artist interviews and reflections on the work, this anthology presents a vital survey of formally inventive 21st century playwriting, and is a perfect collection for study and performance. U.S. Drag by Gina GionfriddoA serial killer named Ed stalks the city, luring his victims by asking for help.

To protect themselves, a group of New Yorkers form SAFE, "Stay Away From Ed." The first rule: don't help anyone.

It's a matter of urban survival. Slavey by Sigrid GilmerIn which Robert and Nora, a couple on the rise, get a big promotion, a bigger house, and a brand new slave. Dot by Kate E. RyanIn which old Dot and the weird kid from the neighborhood become friends.

Set in that kind of Florida town that makes you wonder: is this TV, a book, or maybe even a cabaret?

Baby Screams Miracle by Clare Barron In which a freak storm knocks down all the trees in town and a prodigal daughter is taught a new way to pray.

But the weird weather's not over yet. Men on Boats by Jaclyn BackhausTen explorers. Four boats. One Grand Canyon. Men On Boats is the true(ish) history of an 1869 expedition, when a one-armed captain and a crew of insane yet loyal volunteers set out to chart the course of the Colorado River. Of Government by Agnes BorinskyThe adventures of Barb the Teacher, Deb the Seeker, Heidi the Helper, Tawny the Addict and a host of others.

With songs! Presented by Miss Marjorie Blain, her students, and members of the community.

Light refreshments will be provided. Plano by Will ArberyTonight, and later, and earlier, three sisters (no, not those ones) are stricken with a series of strange plagues.