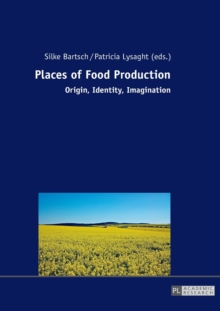 This book explores the relation between food production and place.

Food production has traditionally shaped the character and self-conceptions of regions giving rise to a recognised linkage between certain foods and geographical areas.

In the age of globalisation, it is inevitable that global food production will affect regional foods and eating habits.

The contributors ask whether this also has a bearing on regions' self-identity.

Although industrialisation has had a major impact on food availability, food safety, and eating habits, industrially-produced food is increasingly regarded as "unhealthy food" in contrast to local food which is seen as being "good for the body".

The volume includes discussions about how consumers deal with perceived risks associated with industrial production.

They uncover a sense of alienation engendered by the invisibility of food production and food management processes and furthermore reflect on the notion of "hidden ingredients" which might influence consumers' imagination about food and food production in general.