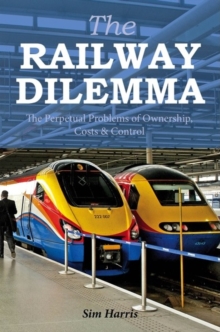 The Railway Dilemma : The Perpetual Problems of Ownership, Costs and Control Hardback

Railways in Britain are booming. Passenger and freight traffic totals are rising every year, and major investment has been approved by the Government and major infrastructure schemes lie ahead.

Yet the industry is moving towards another crisis which could explode within the next ten years. The franchise operators own virtually no assets and private financial institutions own the rolling stock so the responsibility for the investment lies with Network Rail, a not-for-profit public body.

Network Rail borrows to invest in its infrastructure.

It is no different in this to many previous railway administrations. The failure of its predecessor, Railtrack, which had shareholders and was a genuine member of the private sector, suggests that it is no longer possible to recreate a commercial railway, in the sense of an industry which makes a real cash profit when the books have been balanced. The author traces the history of the perennial problems of ownership, costs and control in Britain's railways from its beginnings, the increasing threat of competition from road transport and the decline in passenger traffic and the profitable freight haulage together with oscillations between public and private ownership.

Arguably, the railways have never been profitable and today, despite rising passenger numbers, a familiar controversy surrounds the amount of public money which should be provided for the industry.

The upgrading of the railways is funded by borrowing which is unsustainable in this age of austerity and efforts to reduce the national debt. The book is divided into three sections as follows: 1.

The early years; the so-called 'Golden Age'; the necessity for the Grouping and subsequent Nationalisation culminating in the Transport Act of 1953 which privatised road transport and decentralised the railways 2.

The efforts to modernise the nationalised railways and return them to profit, which ended in privatisation 3.

From the 1993 Railway Act and privatisation to the present day