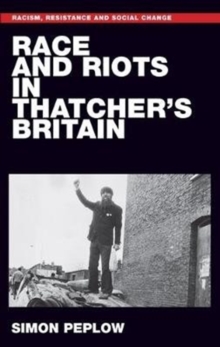 Part of the Racism, Resistance and Social Change series

This powerful and original book locates the anti-police violence that spread across England in 1980-1 within a longer struggle against racism and disadvantage faced by black Britons, which had seen a growth in more militant forms of resistance since the Second World War.

It explains these disturbances as 'collective bargaining by riot' - attempts to increase political inclusion by this marginalised group.

Through case studies of Bristol, Brixton and Manchester, the book explores the actions of community organisations in the aftermath of disorders.

Highlighting the political activities of black Britons and the often-problematic reliance upon 'official' sources when forming historical narratives, it demonstrates the contested value awarded to public inquiries - contrastingly viewed by black Britons as either a method for increased political participation or simply a governmental diversionary tactic. -- .