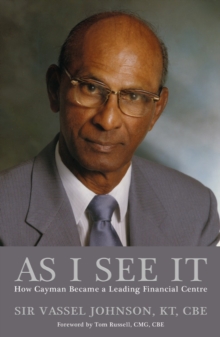 As I See It : How Cayman Became a Leading Financial Centre Hardback

This book covers the period of time during which the Cayman Islands were transformed from an obscure group of three British islands in the Caribbean to the fifth largest financial centre in the world. The transition was the brainchild of the country's then Minister of Finance, Sir Vassel Johnson, whose book traces the reason for this change and the process by which it was accomplished. It begins with his journey as a young child from Jamaica to Cuba where his parents settled in a Caymanian community on the Isle of Pines (now the Isle of Youth) to make a living by farming.

Ten years later the family moved to Grand Cayman where, with the help of Caymanian families who had been their neighbours in the Isle of Pines, they settled and made a home. This was the first time that Vassel and his younger siblings received a formal education and Vassel graduated senior school with distinction within 4 years.

On leaving school Vassel went to work with the Cayman Islands Government where he met Rita Hinds, and they were later married and had 7 children. Rita's family was among the original settlers of Grand Cayman, hailing mainly from the British Isles, and they were hardworking with strong church and community ties.

At that time Cayman's economy was quite poor and apart from a few government jobs, was largely sustained by the earnings of their men who went to sea and worked with the US Merchant Marine.

When most of these jobs became redundant with the advent of containerised cargo, the men returned home where few jobs were to be had. This was the turning point in the islands' history, and resulted in Vassel's efforts to provide jobs by creating a financial industry that would have spinoffs to support families and the country's essential services.