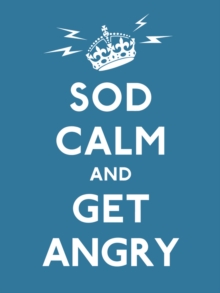 During the current recession it seems our traditional stiff upper lip can only last so long before those other world-beating British skills come to the fore - quiet grumbling and resigned cynicism.

Sod Calm and Get Angry is for anyone who has finally had enough of bankers and politicians and bosses telling them to keep sodding calm and to carry bloody on.

Sod Calm and Get Angry is both a rallying call and an essential tome of comforting wisdom and quotes for the depressed, enraged, disgruntled, disenfranchised and those of a naturally curmudgeonly disposition. On PoliticsThe word 'politics' is derived from the word 'poly', meaning 'many', and the word 'ticks', meaning 'blood sucking parasites' - Larry Hardiman On WorkOne of the symptoms of an approaching nervous breakdown is the belief that one's work is terribly important - Bertrand RussellOn MoneyThe easiest way for your children to learn about money is for you not to have any - Katherine WhitehornOn HypocrisyHypocrite: the man who murdered both his parents... pleaded for mercy on the grounds that he was an orphan - Abraham LincolnOn WarYou can't say civilisation don't advance... for in every war they kill you a new way - Will RogersOn LifeThat's the secret to life... replace one worry with another - Charles M Schulz