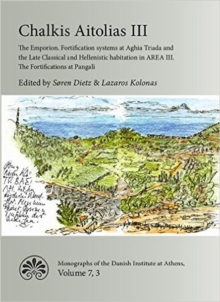 Part of the (Monographs of the Danish Institute at Athens Series -- Volume 7.3) series

Chalkis Aitolias III is the third and final report of the Danish/Greek archaeological field work in Chalkis Aitolias situated near the present-day village of Kato Vasiliki, between Mesolonghi and Naupaktos on the south coast of Aitolia.

Excavations were conducted at Aghia Tridia in seven campaigns from 1995-2001.

This volume focuses on the dating, construction and re-construction of the considerable terrace-and fortification walls on Aghia Triada and the excavations of the Late Classical and early Hellenistic workshops and storerooms on the north-east side of the mound.

Furthermore, this volume covers scientific analysis of the general topography and fortification systems including various studies of the different time periods, geological investigations and examples of finds.

Many scholars have added their field research to this volume, which is edited by Soren Dietz and Lazaros Kolonas.