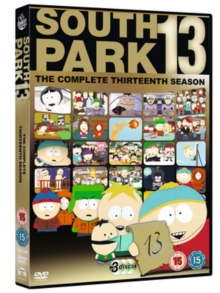 All 14 episodes from the 13th season of the no-holds-barred animated comedy series created by Trey Parker and Matt Stone.

This series finds the boys saving not only the economy but also the whales and several dead celebrities - all the while savouring the unparallelled joys of Fish Sticks.