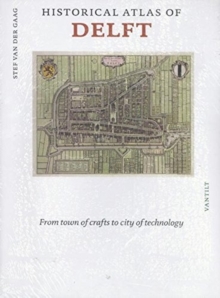 Historical atlas of Delft : From Town of Crafts to City of Technology Hardback

Delft is one of the loveliest canal cities in the Netherlands.

The skyline of the city centre is dominated by two monumental churches: the Oude Kerk (Old Church) with its characteristic crooked tower, and the Nieuwe Kerk (New Church), where members of the Dutch royal family have traditionally been interred.

The city is well known for its leading role during the Dutch Golden Age, when its outport of Delfshaven on the River Maas enabled it to be closely involved in the work of the Dutch East India Company (VOC).

Arts and crafts flourished: dozens of potteries manufactured the famous Delftware, and Johannes Vermeer painted works including his celebrated View of Delft.

The Golden Age was followed by a long period of stagnation and decline, and it was not until the mid-nineteenth century that the tide began to turn.

Delft was now connected to the railway system, and became an industrial city.

The Agneta park an early example of purpose-built working-class housing, with plenty of green space and winding streets was created on the initiative of a local industrialist.

This was initially based on strictly functional planning, with ample room for car traffic; but in the 1970s and 1980s residential streets were built in reaction to this.

The railway area has recently undergone a complete facelift, with a twokilometre tunnel and an underground station replacing the concrete railway viaduct from the 1960s.

The Historical atlas of Delft traces all these developments with reference to historical maps, specially drawn thematic maps and a wealth of prints, paintings and photographs.

The history of the Delft engineering course, the forerunner of todays University of Technology, is described in an appendix. 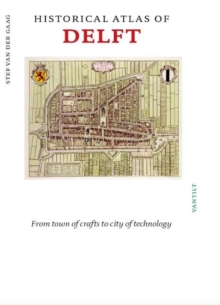