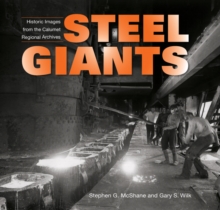 At the turn of the 20th century, an army of workers descended upon the northwest Indiana dunes to forge a world-class steel industry for America.

As a result of the mills constructed by companies such as U.S.

Steel and Inland Steel, grid-like cities on the shoreline of Lake Michigan grew into prosperous steel towns, drawing workers from all over the country and beyond.

The Calumet region became one of the most heavily populated and ethnically diverse regions in the nation.

The story of its phenomenal growth was captured by photographers from U.S.

Steel in Gary and Inland Steel in East Chicago. Steel Giants presents a selection of these dramatic photographs, with detailed captions, showing the construction of the steel mills and steel towns, the early production of steel, and the people who lived and worked in the industry.