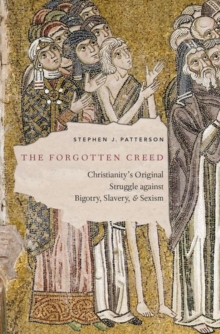 Long before the followers of Jesus declared him to be the Son of God, Jesus taught his followers that they too were the children of God.

This ancient creed, now all but forgotten, is recorded still within the folds of a letter of Paul the Apostle.

Paul did not create this creed, nor did he fully embrace it, but he quoted it and thus preserved it for a time when it might become important once again.

This ancient creed said nothing about God or Christ or salvation.

Itsclaims were about the whole human race: there is no race, there is no class, there is no gender. This is the story of that first, forgotten creed, and the world of its begetting, a world in which foreigners were feared, slaves were human chattel, and men questioned whether women were really human after all.

Into this world the followers of Jesus proclaimed: "You are all children of God.

There is no Jew or Greek, no slave or free, no male and female, for you are all one." Where did this remarkable statement of human solidarity come from, and what, finally, happened to it?

How didChristianity become a Gentile religion that despised Jews, condoned slavery as the will of God, and championed patriarchy?Christian theologians would one day argue about the nature of Christ, the being of God, and the mechanics of salvation.

But before this, in the days when Jesus was still fresh in the memory of those who knew him, the argument was a different one: how can human beings overcome the ways by which we divide ourselves one from another?

Is solidarity possible beyond race, class, and gender?