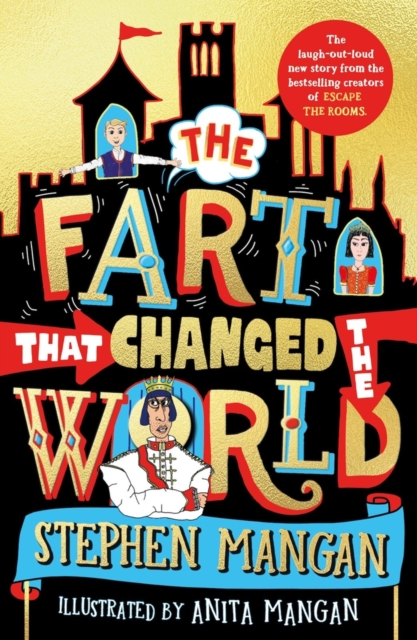 The Fart that Changed the World Paperback / softback

A high-energy, laugh-out-loud, fully illustrated adventure story by much-loved actor Stephen Mangan and talented artist Anita Mangan. It's the most important day of the year for King Fabian as he is hosting all the neighbouring rulers.

Everything simply must go perfectly. King Fabian wakes up, stretches, and farts. His wife's fury is so huge that he panics and blames the butler, who is carted off to the dungeons.

Leaving behind a big problem: Fabian isn't really the brains behind the crown: it is the butler... how will dithery Fabian manage to pull off this high-pressure event alone? His small and smelly fart looks like it will kick off a crisis... Frank - a kitchen boy with a big imagination - is drafted in as an emergency butler.

As the banquet descends into a food fight and processions catapult out of control, Frank finds himself in an all-out farty farce.

Can he save the day? Wildly funny and endlessly surprising, this is delightfully imaginative, surreal storytelling with a message that small events can trigger big change, and children can be heroes! Packed with pictures by Stephen Mangan's sister Anita Mangan. Escape the Rooms is one of the most loved and bestselling children's debuts of 2021. Praise for Escape the Rooms: "A brilliant, clever, kind of genius book" Graham Norton, Virgin Radio 'Richly imagined and deeply heartfelt' Hadley Freeman, Guardian 'Manages to feel both classic and modern at the same time' Good Housekeeping 'A beautiful and exciting adventure that ignites the imagination' Edith Bowman 'It's brilliant' Ray D'Arcy, RTE Stephen Mangan is an author, script-writer and actor with huge range across TV, radio, film and theatre.

From classic comedy such as Green Wing, Episodes and I'm Alan Partridge and acclaimed drama such as The Split, Stephen also presents Portrait and Landscape Artist of the Year and regularly appears on stage, most recently as a highly praised Ebeneezer Scrooge in A Christmas Carol.

Stephen also voiced the title role in Postman Pat: The Movie. He has been a member of the judging panels for the Costa Book of the Year prize and The Laugh-Out-Loud Awards (The Lollies).

His first children's book was the bestselling Escape the Rooms. Anita Mangan is a celebrated graphic designer and illustrator who has designed over 60 books including for Leon Restaurants, Gizzi Erskine and Fearne Cotton.

She illustrated the best-selling Be a Unicorn series.

Her first children's book was the bestselling Escape the Rooms.