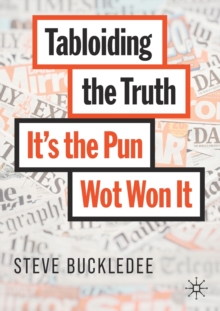 Tabloiding the Truth : It's the Pun Wot Won It Paperback / softback

What skills do journalists exhibit in sensationalising, exaggerating and otherwise 'tabloiding' the truth, while usually stopping short of stating unambiguous falsehoods?

Why has the tabloid news not collapsed as predicted, but thrived as a medium in an age of interaction and online commentary?

This book is a comprehensive and accessible exploration of the British tabloid newspapers from the 1960s to the present day.

Examining topics such as sex and the representation of women, national stereotypes and Britain's relationship with Europe, war coverage, celebrities, investigative journalism and instances where the tabloids have misread the public mood, the author draws on Critical Discourse Analysis and Stylistics to take a language-led approach to the UK tabloids.

With its interdisciplinary approach and readable prose style, this book will be of interest to a wide range of readers across language and linguistics, media and communication, journalism, political science and British cultural studies.