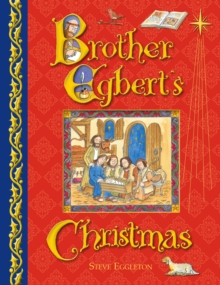 Brother Egbert is a monk at Willingford Abbey. He spends most of his time copying out pages from the Bible in beautiful handwriting, but on Sunday afternoons he invites the children of Willingford to come and read the Bible stories he has written especially for them.

This is how Jake, the woodcarver's son, learns the story of Jesus' birth, the story that inspires Jake and his father as they make a new carving for the abbey church... and that carving inspires Brother Egbert to write this story.

Presented in the style of an illuminated manuscript with calligraphy and highly colourful pictures interacting with the lettering, the book captures the spirit of one of Brother Egbert's own manuscripts.

Included in the back are instructions on how to make your very own illuminated manuscript!

The beautiful hardback with gold foiling and linen quarter binding make this a stunning and unique Christmas gift.