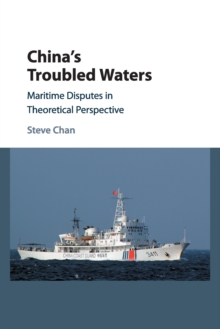 How are China's ongoing sovereignty disputes in the East and South China Seas likely to evolve?

Are relations across the Taiwan Strait poised to enter a new period of relaxation or tension?

How are economic interdependence, domestic public opinion, and the deterrence role played by the US likely to affect China's relations with its counterparts in these disputes?

Although territorial disputes have been the leading cause for interstate wars in the past, China has settled most of its land borders with its neighbours.

Its maritime boundaries, however, have remained contentious.

This book examines China's conduct in these maritime disputes in order to analyse Beijing's foreign policy intentions in general.