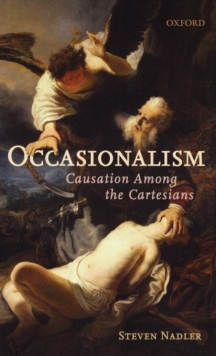 Occasionalism : Causation Among the Cartesians Hardback

by Steven (University of Wisconsin-Madison) Nadler

Steven Nadler presents a collection of essays on the problem of causation in seventeenth-century philosophy. Occasionalism is the doctrine, held by a number of early modern Cartesian thinkers, that created substances are devoid of any true causal powers, and that God is the only real causal agent in the universe. All natural phenomena have God as their direct and immediate cause, with natural things and their states serving only as "occasions" for God to act.

Rather than being merely an ad hoc, deus ex machina response to the mind-body problem bequeathed by Descartes to his followers, as it has often been portrayed in the past, occasionalism is in fact a full-blooded, complex and philosophically interesting account of causal relations. These essays examinethe philosophical, scientific, theological and religious themes and arguments of occasionalism, as well as its roots in medieval views on God and causality.