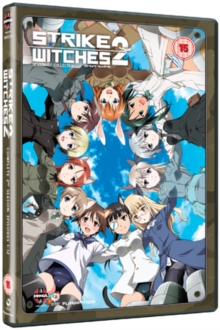 All 12 episodes from the second series of the Japanese anime about a crack team of young girls who take on alien invaders using magic powers.

In 1939 a war began that rendered traditional military capabilities redundant.

The brutal alien race Neuroi destroyed a number of cities and took control of the world.

The hopes of the human survivors now rest with the so-called 'Strike Witches', a group of young girls who are sent into the skies to fight back against the aliens with their magic powers.

The episodes are: 'Into the Sky Once More', 'The Legendary Witches', 'Things We Can Accomplish Together', 'Harder, Faster, Greater', 'My Romagna', 'Higher Than the Sky', 'Creeping About', 'Please Grant Me Wings', 'The Bridge to Tomorrow', '500 Overs', 'To Be Myself' and 'Beyond the Skies to Eternity'.